PatriotHeadquarters.com
Welcome! This is where you’ll find answers to the Trivia Bits questions, as well as solutions to the puzzles from the March 2017 edition of the Patriot Alliance Messenger.
Click here to sign up for the 4Patriots daily newsletter, featuring commentary, tips and strategies, and our latest offers.

2. On March 4, 1789, the first meeting of Congress under the new U.S. Constitution took place in which city?
1. Washington
2. Boston
3. Philadelphia
4. New York

3. On March 23, 1775, which patriot ignited the American Revolution with a speech that included the phrase, “I know not what course others may take; but as for me, give me liberty or give me death!”
1.Patrick Henry
2. Samuel Adams
3. Nathan Hale
4. John Jay 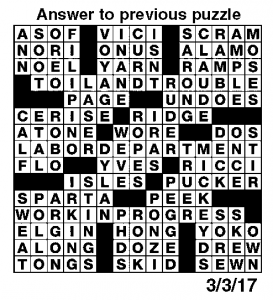